Over the course of the Christmas holidays, I took the opportunity to take a break from working on completing the Might & Magic Xeen engine to do some further work reverse engineering and implementing code for my Legend Entertainment games engine in ScummVM. The result can be seen in a demonstration video on Youtube. 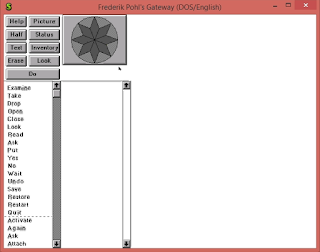 For now, I've been focusing on disassembling two of the Legend Entertainment games, Frederick Pohl's Gateway, and Companions of Xanth. The former is one of the earlier games with a combined picture and text parser, whilst the latter is the more standard point-and-click type of adventure game. Both share a lot of code in common; though as I've discussed previously in details, the two have some key differences.. Xanth is a full 8-bit point-and click game, but it uses a very annoying overlay manager that makes dissasembling and debugging the code really trouble. Gateway, being an earlier EGA game, is much easier to do.

Over the week I spent on the games, and my engine, there were two main advances. Firstly, I increased my understanding of how the original did the core event handling and renderings. Renderings in particular were somewhat messy, with different parts of UI elements being drawn in different methods; some when the game window is first opened, and others as event changes occur. Using the listbox in particular as an example, I tracked down where the different parts were being drawn and cleanly re-implemented them together into their own draw method of a Listbox class.

Likewise, the Commset also proved useful in being a separate custom screen which nevertheless used many of the core engine's methods for creating windows, defining interactable regions of the screen, drawing, and event processing. I was almost to the point of implementing the initial text display within the Commset when the week ended.

The second major area was fleshing out my engine's event handling. As can be seen from the example video, game views can now be rendered, and the listbox interacted with. This represents a lot of modular code in my engine taking care of managing what the current view is, as well as gathering mouse events and dispatching them into a hierarchy of parent/child game views that can represent the game screen, and then individual elements within it like the Listbox. A lot of this draws inspiration from the Titanic engine, which heavily uses a hierarchy of game views, as well as message handling for passing messages between elements.

The result is that I'll be able to avoid, for example, a lot of hardcoding the original has for handling the two different listboxes. Instead, I can set up the listbox to generate a message when an item is clicked, and then have processing code in a parent "User Interface" class for the overall game screen that will handle replacing the listbox contents as necessary, as well as passing on selected words and/or phrases to the text entry widget where the player inputs their commands.

All this is to keep hardcoding to a minimum, particularly once I've got a better feel for the engine, and start working on Companions of Xanth in greater detail. The idea is to eventually make it easy to support other games, like Death Gate\, so the less hard-coding there is for specific games the better. This current design allows for a modular build up of game content, with an overall "project item" that contains the different views like the game interface, conversations, and so on. And visual elements like the game interface can be further build up of individual UI components like the game scene, inventory, command buttons, and so on. Much of which will be able to be cleanly re-used between the games.

Anyway, now that the holidays are over, I've returned to work on the Might & Magic Worlds of Xeen engine. I'm wary of calling it "nearly completed", but it certainly has a lot of functionality in it already. So it deserves to be finished, fun as continuing to work on the Legend games might be.

Once that's done, though, who knows when I'll next return to work on the Legend games. I may well do it directly after. Although, the recent discussions of AGS have also piqued my interest as well. Depending on whether or not anyone else has taken up the reins of working on it to any degree, I may refocus my effort onto it. And of course, there are the later MADS games like Return of the Phantom & Dragonsphere that could be worked on. Not to mention the Access engine, with Martian Memorandum. Plus various different other RPGs. It's always nice to have options :)

Posted by Dreammaster at 1:30 PM

I'd love to help on one of those games. On the Legend side, I have a specific interest in a couple of those as I played them (and never managed to finished them at the time) and loved them: Spellcasting trilogy and Eric the Unready.

Spellcasting 101 and 201 looks older than Gateway, so maybe I could help by starting to look at Spellcasting 301. And of course, I'm still interested by MADS, Access... And TsAGE :D

Let's talk tabout that when you're done with Xeen. Except if I can help with Xeen (though I have a doubt about it)