It seems like the testing of the Sherlock games has been a success. There were lots of bug reported, and all the ones reported so far have been fixed. The foreign language versions haven't all been fully tested yet, but hopefully now the immediate crashes with conversations and inventory in both Serrated Scalpel and Rose Tattoo foreign language versions have been fixed, and the rest of the games can be tested. I'd like to thank everyone who's tested so far for your efforts, and feel free to post any more bugs you come across. Though hopefully there won't be too many more to find :). And if one else has copies of either game, particularly different foreign versions, any other testers would be appreciated.

Right at the moment I'm at the sweet point where all the outstanding bugs for Sherlock have been resolved, so unless new ones come in, I can turn my attention to other things.

So, whats coming next for me? Several things:

Serrated Scalpel 3DO still isn't completable. There are some areas, such as the darts game to fix up, and there are still some differences in sprite positioning that would need to be accounted for. It's somewhat constrained by the fact that we don't have any original source for it, and I don't have any experience with reverse engineering 3DO games. It may simply be a case of do as best we can with hardcoded fixes as necessary.

Next, there's the RTLink/Plus overly handling in Companions of Xanth. I'd previously had some luck writing a tool to process Rex Nebular and create a flat executable with all the segments suitable for disassembling, but doing the same for Companions of Xanth proved elusive. Over the years I made several attempts, but none bore fruit. Until now. As of yesterday, I was finally able to write a new version of the tool that successfully generated a flat executable that could be disassembled. So one day, after a great deal of disassembly work, ScummVM may support the game.

My only disappointment is that RTLink/Plus seems to have had quite a number of variations. Rex and Xanth's RTLink mechanism were fundamentally similar, with all the RTLink code, segment list, and method thunks/stubs in the executable and/or overlay file. For several other games with RTLink that I tried, however, they seem to use a bizarre alternate method where a file called 'rtlinkst.com' is loaded, then an '.RTL' file for the game, and finally only then the game executable. Which means that my tool doesn't work with them, and I'd need to figure out this new mechanism from scratch if I want the tool to be general-purpose enough to handle any RTLink game anyone might want to use it on in the future.

Guess that can be another long-term project to muck around with. Hopefully it won't take as long as it did to finally get Xanth properly disassembled. :). I'll probably make another posting in a day or so about RTLink in more detail, for those that are interested.

Next there's my work on re-implementing Might & Magic - World of Xeen (and Clouds of Xeen, Dark Side of Xeen, and Swords of Xeen). With some free time last weekend, I finally returned to working on them, and likewise was finally able to properly disassemble the  algorithm the original used for scaling. So as of now, sprites are now correctly scaled, as before I was only using a rough guess scaling code I'd nicked from another game engine. I've also fixed some other drawing bugs for drawing outdoor areas (outside town). So as of now the game scenes now display properly! :) 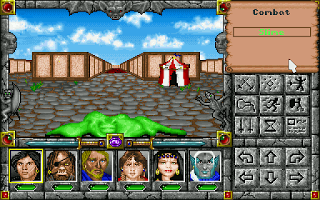 That's right, you can now walk around, fight monsters, go visit the various buildings in town, and even leave the town! In fact, most of the functionality for the games are already implemented. Apart from lots of testing and minor bugfixes that will be needed, only the following major areas remain to be implemented:


At the moment I'm concentrating on getting World of Xeen (which combines Might & Magic 4 and 5 together) working. But then afterwards I'll implement separate support for 4 and 5, as well as for Swords of Xeen. It might even be feasible to handle Might and Magic 3 - Isles of Terra as well, since I'm given to understand the engines are nearly the same.

Those interested in following the progress can see it at the brand-spanking new RogueVM Github account. That's right; after all the years of idle talk, I've finally set up a place to properly store RPG related game engines. No website yet, but at least it's a start. :) I'll likely spend the near-term focusing mostly on finishing support for the game before I move onto any other adventure games, considering how far along the engine is already.

Return of the Phantom

Strangerke has put a lot of work recently into implementing scene logic for Return of Phantom, the next MADS game that was published after Rex Nebular. There are quite a few stubs for missing engine functionality that was added in though. So when I do return to working on adventures, it will likely be to assist him in completing the game.

Posted by Dreammaster at 3:01 PM No comments: