PET is PrETty much done

Hi all. Been a while since my last posting; and a hectic last couple of weeks. After flying down to Florida for a 4th July long weekend getaway, I was barely back before I had to get ready for a work trip to the west coast. Then I get back to two days of company photo-shoots, which kind of disrupted getting back to normal work; but no sooner than they were done, I come down with a cold and had to stay home for several days. And was too sick to even really use my computer until now. :(

Nevertheless, despite all of that, work has been progressing on Starship Titanic since my last posting, and I've made a lot of progress. Firstly, there's the PET User Interface. This was one of the major areas that still had to be investigated last time. Since then, I've spent a lot of time figuring out how everything works, and re-implementing it all in my ScummVM engine. Behold the fruits of my labor: 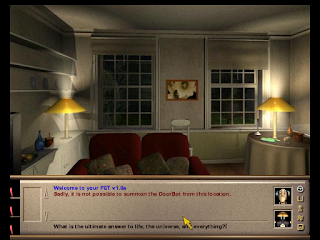 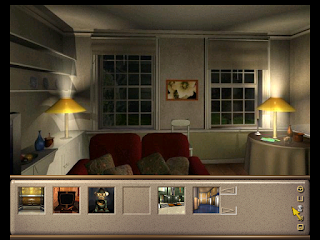 Code for all the various areas has been pretty much all implemented. You can enter text in the conversation tab, and click stuff in all the others. There's just a few minor visual and functionality glitches here and there, such as the dials in the above image. Some of the tabs, like the Remote and Rooms tabs, are mostly untested at the moment.. it will be easier to test when I have more of the game logic implemented, and can properly test them with live data. Saving and Loading is also waiting on me to finish the saving and loading code.

As before, I was aided somewhat in implementing the PET by how clean the class hierarchy was designed, and the fact there were various internal error messages scattered about the code to give an indication of the classes' original names and purposes. For example, the code has a single common class CPetGlyph for the square glyphs used in all the different PET tabs, and CPetGlyphs for the collection of glyphs, with all the logic for scrolling and rendering. Individual PET areas simply derived from that, and instantiated whatever glyphs were needed, be they action icons like for Save, Load, and Quit, or inventory items that can be selected.

Once the PET was pretty much done, I started looking into the conversation handling and text parsing. To begin with, I worked one of the easier, self contained areas of vocabulary loading. All the vocab data for Starship Titanic is held in a resource inside the game executable called STVOCAB.TXT. It holds the data for an impressive 4700 words! A lot of these come down to synonyms for common words, and in fact even includes foreign language words, like "ein" as a synonym for "a". Each word entry in the file also contains data for what kind of word it is (such as action, adjective, etc.), as well extra information that is used by the parser to uniquely identify the words. The vocabulary loader builds up  the data for each word in turn, building a master list of overall words support by the game, and a linked list of synonyms for each word.

Once I did that, I started looking into the input processing code that gets called when a line of text is entered in the PET. First of all, the game calls some pre-parse methods. These take care of a bunch of standard processing of the line, including:


Once preprocessing is done, it then breaks down the entered sentence into a series of words. Each word is checked against the word synonym lists to identify the known word for each entered word. Here again, the parser has extra complexities that surprised me. It can not only find word matches based on exact word matches, it has two fairly complicated routines that can identify various forms of pluralization, as well as common word prefixes like 'super', 'anti', 'counter', etc. and find matches on the word without the prefix. At the end of this process, the entire input has been broken done into a linked chain of recognized words, and the real handling of figuring out the player's input can be done using custom logic for each NPC script.

At this point, whilst I had made some inroads on NPC script handling, I somewhat started drifting on what area I worked on. Strangerke had been looking at some of the core game scripts to add me in writing game logic, so to make things simpler in the long-run I went back to the main CGameObject base class, and spent some time figuring out all the remaining unknown methods. Quite a few of the methods were basically stubs calling PET Control methods, so my prior work on the PET was a great help.

Next, there was a bunch of CGameObject methods calling movie code, so I decided it was finally time to figure out what it was doing. I was able to properly implement the game's OSMovie class which handles movies, and it's AVISurface which handles the low level AVI files. It was actually interesting in that some videos have a second video track - I haven't 100% disassembled the movie drawing code, but my impression is that pixels in one are transparent, and in the other are not.  This required me to add an extension to our AVIDecoder to allow a callback method for selecting which streams the AVIDecoder would use. That way, I could set up two decoders in the AVISurface class, one with the audio and first video track, and the second with the second video track, if present. This neatly avoids the limitations of one video track per decoder. The replacement movie code is all implemented now, but apart from cursor loading working (the cursors are stored frame by frame as a video), movie playback is still crashing, and will have to be debugged further. But at least I know what the bulk of the movie methods are now.

Finally, I moved onto the Star Control class. This is what implements the game's starmap control.. with PET mostly implemented, NPC scripts partially implemented, and movie handling more or less done, only it and sound are left unlooked at. And as I've mentioned previously, sound handling has a lot of spatial processing for sounds that I may simply not implement - the AVIDecoder already handles video sound, and I'm hoping to hook up the other sound methods to simply use standard ScummVM sound decoders. So that makes the star control the only remaining large area to look into.

Oh boy, and what a large area it is. Even basic identification of classes was already bumping up to nearly 30 classes all specific to just the star control. I felt greater and greater dismay the further I looked into it. Honestly, it was like Hopkins FBI all over again, where they included a full Wolfeinstein 3D style minigame in the PC release. In that case we were lucky, and could simply ignore it. Not so much in this case - all the classes will have to be implemented.

As I've looked into it further, and worked on classes that don't depend on others (so are self contained, and in theory easier to figure out), some of them have started to make sense. There's matrix and vector classes.. somewhat surprisingly, two versions of each, one for floating point numbers and one for doubles. I can only assume back in the day there was space vs speed considerations for having both types; I've not yet reversed all the methods, so I don't know if they can be merged in the future. I've also identified two "star points" classes that use large lists of spatial data that was hard-coded in the executable. Hopefully, the other remaining classes won't be too hard to figure out likewise.

So, all in all, things are going good. I'm starting to feel better, and I'm making inroads on the last major area of the game. Once I get that out of the way, it'll be a matter of finishing off the NPC scripts, implementing miscellaneous methods here and there such as sound handling, and then implement the game logic. Which, with all the core engine implemented, will hopefully be a straightforward, if slow process.