Once again, it seems I fell out of habit of doing regular blog updates. Though hopefully you'll at least be ameliorated by the fact that I have at least been busy over the last few months. With the start of 2020 finally upon us, I thought it would be an opportune time to summarize what I've been up to.

First of all, the ScummVM Glk engine has been going well. Before I put it on hiatus late last year, I'd already converted over 2/3rds of the existing engines to run under ScummVM, with cleanups and hooking into the ScummVM save system, etc. At this point, there's only a few sub-engines from the original Gargoyle suite left, chief among them TADS which, due to it's complexity, will likely take some time to clean up so that it compiles properly as part of ScummVM. I had previously done a preliminary conversion of TADS 2, but there were problems with immediate crashes that I couldn't figure out. I'm hopeful that doing a fresh conversion of both TADS 2 and 3 at the same time may result in a better outcome this time.

Next comes my work on Ultima. Back at the start of December, I'd had plans to keep working on Glk right up to my Christmas holidays. However, after a non-serious prodding from Dominus Dragon about Pentagram (the engine for playing Ultima 8) still not yet being supported, I started looking at what it would take to convert over the engine. And ended up getting hooked on it, to the exclusion of all else for the next several weeks. So below, I present a screenshot of Ultima 8 running in ScummVM: 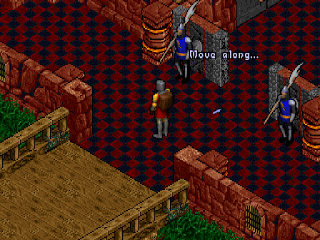 As of Christmas, the only area I had left to update/correct was that of the music player.. I still need to figure out how to hook it into ScummVM. Otherwise, everything else seems to be working fine.. I was able to play the introduction, get through the docks cutscene, and then enter the city. I haven't yet really put the game through it's paces beyond that. It's better to wait until I'm happy that everything is properly implemented.

And I got distracted yet again, although this time intentionally. At this point, my Christmas holidays had been reached, and I really wanted something a bit more fun to work on than just bugfixing  and playtesting of Ultima 8. Trying to work my way through all those caves and jump platforms wasn't my first choice for my R&R activities.. I much preferred working on the engine itself than actually playing the game.

Back when I started getting hooked on working on Ultima 8, and realized how fun it was, I again set my sights on Nuvie, the engine for Ultima 6 and spinoffs. I'd previously asked the lead developer, Eric Fry, nearly two years back about integrating Nuvie into ScummVM, but at that time he still wanted to work further on Martian Dreams on it with it still being the familiar stand alone project. Trying again in December, I got no response, even after several weeks, and asking a co-developer, again Dominus Dragon, to also try contacting him. Since it had also been several months since any commits had been done, I decided that I'd done my due diligence, and it was finally fair game.

So over the holidays I put Ultima 8 aside, and worked on integrating Nuvie into ScummVM as well, creating a shared "ultima" engine that contains both Ultima 6 and Ultima 8. And, eventually, hopefully the other remaining Ultima games as well. Including my in-progress reimplementation of Ultima 1, which I originally put on hiatus way back when I first got agreement to merge Gargoyle into ScummVM.

So over the holidays I had further fun of converting the Nuvie engine. To make things easy for users, the new ultima6 subengine has two different detection entries, with "original": 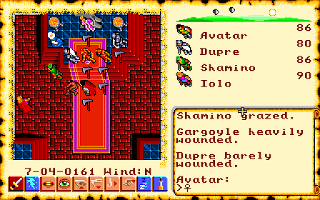 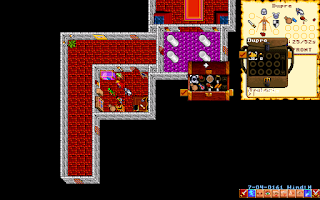 As you can see, original gives the look and feel of the original game, whereas the Enhanced version automatically sets all the Nuvie options for enhanced graphics, full screen map, and Ultima 7 style gumps. So users will easily be able to play in an enhanced mode without worrying about fiddling around with configuration options.

As of now, the game starts up and runs. It still needs some work testing the various areas, and making sure it all works properly. In it's case, the sound code was a lot easier to convert than for Pentagram. It actually already used copies of the ScummVM mixer and stream classes. So it was a pretty straightforward process to simply remove them, and remap the code to use the original ScummVM classes instead. Such a relief :).

A downside, though, is parts of the engine, such as the cutscenes, were written in Lua rather than C code. This has disadvantages for properly supporting the game in ScummVM. First of all, I've had to duplicate the entire Lua runtime from Nuvie just to run the scripts, as the version of Lua we have in common/lua/ can't execute the scripts, giving an error when I tried. Plus, when the intro sequence is running, the system isn't properly updated, which means I can't drag the window or, more seriously, exit ScummVM by closing the Window. Long term, I'm likely going to have to rewrite the Lua scripts as C++ code and classes, so Lua can eventually be entirely removed. That will give me greater flexibility to properly handle events for the cutscenes. Also, for enhanced mode, I set the graphic mode to double size of the original, so rewriting the cutscenes in C++ would also make it easier to either stretch the cinematics, or temporarily switch back to 320x200 mode for them.


So where am I going from here? Well, the larger portion of my time is going to return to working on Glk again. Given it's advanced state, I'd be happier getting it finally done and properly supported. At least for the engines that were already part of the Gargoyle suite. Converting other non-Glk-compliant interactive fiction engines can wait until some other time in the future. I'll also spend some smaller portion of my time still working on Ultima 6. For now I'm not worrying about converting the Lua scripts.. I'll first be focusing on ensuring that the rest of the engine is running solidly under ScummVM. After that I can worry about the scripts. We'll see how I go :)

Posted by Dreammaster at 4:49 PM 2 comments: