MADS disassembly is back on track

Since it's been a month since my last posting, I thought it was time to post a status update. The work on disassembly of the MADS (Rex Nebular) engine has been going well.. I've made a lot of progress on various areas of the game logic.

I haven't actually added much code to the ScummVM engine yet, since I decided it would be better to fully understand a given area before I implement it. At the moment, my reverse engineering has been some undirected - it's obviously more effective to work on whatever areas you can find that are easiest to disassemble, which in turn may make other areas easy to disassemble later on. However, it does mean that there are bits and pieces across the entire engine that are now understood better.

One area of the game engine that's going to prove interesting is all the hard-coded game logic - each scene has several routines associated with it for scene loading, scene animations, and handling interaction with elements. Obviously it would be preferable not to completely reimplement these in code, since it would take a lot of code space, and there are two other games whose code would also need to be reimplemented.

What will probably need to be done is to create some kind of basic script interpreter engine, and convert the various scene routines to an interpretable script. Luckily, most of the routines seem to use a fairly simple subset of x86 instructions, so it shouldn't prove an impossible task. In any case, that's something for the future, when I fully understand all the various routines the methods call. For now, I've set a short term goal of manually implementing the logic for the first game room, and will return to the idea of scripts at a later date.

On a final note, for those of you who like pictures, see below for an example of the scene walkable areas for the fist scene of Rex Nebular. It also has a slightly weird sprite frame from Rex inserted into the picture - Rex isn't movable yet, though.. it's just a test from some of the loaded sprites: 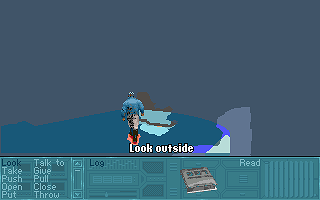 Posted by Dreammaster at 8:54 PM

johndoe has already created a script interpreter for the M4 engine (which reads generated scripts stored inside m4.dat) - perhaps it is useful for the MADS part, too?

Thanks for the suggestion. I had remembered Johndoe's work - I'd never really looked into it much, so I'm not sure how easily it can be re-used for the MADS engine. At the very least it may prove a good base for further work.

just posted this find there, 2 devs from the Rex team who might be able to help.