What a difference a mere week can make in terms of progress. At the beginning of last week only the basic background from one scene was showing, although there was more code implemented in the engine that wasn't yet working. Now, a week later, behold the progress of Rex Nebular on ScummVM: 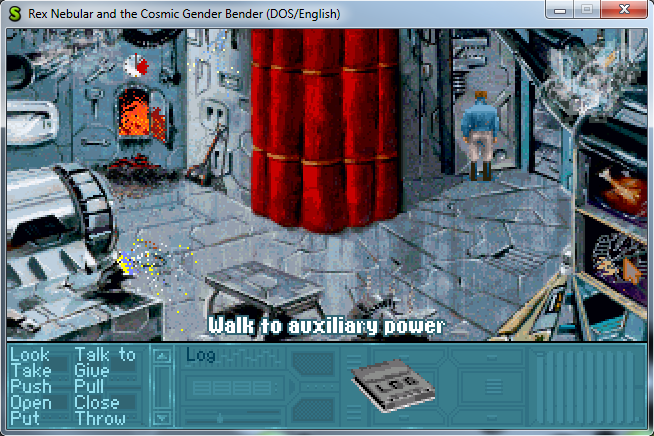 That's right, in a rush of effort this week, the Rex Nebular engine has already passed several milestones in development:

The focus for the upcoming week will now be on the beginnings of user interaction and action handling. This means getting walking working, selections in the user interface, and actually being able to execute actions. A lot of the needed code is already in place, but will require some heavy duty debugging and comparison against the original to figure out where things are going wrong. We're somewhat hampered by the complexity of the core engine when doing debugging, but we'll get there eventually. :)

Posted by Dreammaster at 1:44 PM

Impressively fast progress! Thank you guys for your hard work! :)

I missed your note about this on FB--this is somewhere between totally hilarious and totally cool!

It's rare that I'm on FB, so my timing is pretty wild: just today I found a box that contained several of my original background paintings. :D

Let me know if you ever need art that's hand-done, or could be done on my 8 year-old Mac.