Rose Tattoo is in progress

Work is progressing well on Rose Tattoo, and as of tonight I hit a major milestone.. the entire game intro sequence is now completable. See the screenshots below: 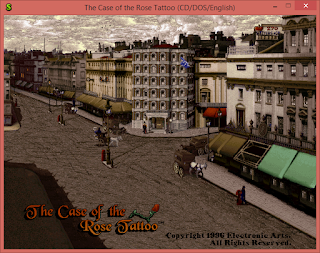 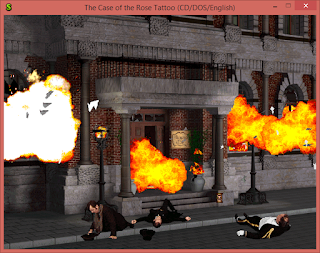 There are still some minor graphic glitches at various points, and one of the scenes which is a double-side scene isn't properly scrolled horizontally yet, but even so, it's a great step forward in supporting the game. We're actually lucky in that Rose Tattoo implemented all of the introduction using standard game scenes. So it saved a lot of effort implementing manual introduction code like had to be done for Scalpel.

Now that the introduction is working, more or less, I'll be devoting more time to implementing the game-play. I'd already been spending some of my working on it, so some interaction is possible.. you can look at objects, open up the inventory, and conversations with characters are partially working. The game map is also already implemented, so you can get to other game locations as well.

On another subject, I had good luck implementing the original EA logo at the start of Serrated Scalpel. I was able to complete support for it in the TsAGE engine, and then used that as a basis for copying necessary code into the Sherlock engine. With some most welcome assistance from others, the EA logo at the start of the game now displays when you start the game, just like the original does.

Finally, on yet another tack, there have been some promising first steps towards supporting the 3DO version of Serrated Scalpel by m-kiewitz, with some assistance from clone2727.  The 3DO was a superior version of game, and included 16-bit color, video portraits, and full speech for every conversation in the game. Supporting this would be great. It would be nice if, one day, the 3DO version could be re-released with ScummVM, so a wider audience could properly enjoy the game.

Posted by Dreammaster at 2:09 PM