There's been a Titanic amount of progress

Since my prior posting earlier in the year, there's been a great deal of progress in Starship Titanic. I decided to put aside the problem of reverse engineering all the Star Map classes until I had the rest of the game working better. In that respect, I've made great strides since, as of last weekend, I was able to complete the entire "prologue" of the game  That included using the computer, experience the crash, talking to the Doorbot, entering the ship, and viewing the Credits. Huzzah. \o/

I was going to prepare a video showing the intro, but with the most recent changes, there seems to be some instability showing up. It seems like something that was already present, just coincidental that the newer changes result in more frequent crashes. It's kind of hard to narrow down the cause, as there's also a problem with the implementation of the Indeo video decoder we're using for NPC videos like for the Doorbot, where it's reading past the end of the frame data. So it's difficult to track down the memory corruption, as warnings about the decoder are completely overwhelming everything else.

So for now, I'll present a screenshot of the amazing multi-color Doorbot :) 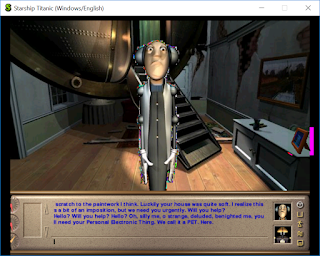 After thinking over matters, I've decided to keep progressing into the game, and come back to look at the problem later on. Part of the trouble I'd been having with the code was the sheer length of the intro as I got further and further into it.. requiring me to wait through several minutes of cutscene & conversation every time I made any changes or bugfixes. Even if the intro has suddenly become unstable, I still have savegames I made from beyond it, so I'm using them as a starting point to make further progress testing into the game.

Speaking of testing, I've had a major boon to my efforts to track down bugs in the code. I was previously stymied trying to test the original Windows executable in the IDA debugger, since it kept crashing on me. Plus running in compatibility mode full-screen didn't help either. And without the ability to see "valid" values in the original executable, I anticipated it would be difficult to track down errors in my code, since I wouldn't know whether values/state at any point in time were already wrong on not.

Luckily, though, I stumbled on a solution. Using the Visual Studio "Attach to Process" allowed me to attach to the game executable without it crashing, unlike IDA. At least, for the majority of the time. Though switching from the game to the debugger and back again caused severe corruption of the full-screen display. Luckily, though, there had been some previous discussions about running the game in a window - I was able to use a utility called DXWnd that intercepted the game's DirectX calls and forced it to run a window. The result wasn't perfect, in my opinion, for anyone wanting to play through the game, but it's worked well enough for my purposes, in conjunction with Visual Studio.

As a result, I'm now making much better progress than I had anticipated, and hunting down bugs is in general much easier than I'd anticipated. Let's hope that stays the case.. my next major gameplay milestone is to complete more extensive conversation with the Deskbot to get myself a room. The basic yes/no detection for the Doorbot worked pretty smoothly first time I tried it. The Deskbot, though, is using more of the conversation parser - I've already located and fixed some problems with it. Let's hope that there won't end up being too many.

On a final note, the one downside of my surging progress with Titanic is that I'm currently spending less time working on finishing my Xeen engine. I'd originally anticipated the frequent roadblocks trying to hunt down bugs in Titanic would have me growling in frustration, and switching to Xeen for awhile to unwind a bit. Now with the ability to debug the original executable, that hasn't really happened so far, and hopefully won't happen. I'll probably end up spending more time right now focused solely on Titanic, and see if I can't get the bulk of the game with the exception of the final starmap working by the end of the year. Then I'll be in a better position to alternate between working on Xeen and trying to disassemble the remainder of the Starmap classes.

Posted by Dreammaster at 4:11 AM