It's an UltimaTE unwinding

After all this time, support for the Might & Magic Xeen games is finally close to being finished. It's currently the official testing period for all the Xeen games, and I've already had a whole bunch of useful bug reports, which I've all taken care of. At this point, it's almost certain that the Xeen engine, and games, will be supported in the next official ScummVM release. It's a nice feeling. More than any other game engine I've worked on, the Xeen engine was the one that got put on hiatus the most number of times. It's very satisfying to finally complete it.

What's in store for me now? Well, I do want to spend some time properly unwinding and actually playing some games. They've only just come out with the sequel to Pillars of Eternity, which I'm now getting into, and plus I have a backlog of other RPG and adventure games that I want to have a chance to properly play. So that will probably keep me occupied for a few months at least. I've also got a move from the US East Coast to West Coast coming up next month. So various preparations are consuming my time, and it's all to the good that work on Xeen has already finished.

Not that I'm totally stopping work on ScummVM stuff. As with the early days of work on Starship Titanic, I started doing some casual reverse engineering during my lunch breaks. By happenstance, I experimented with the Ultima 1 executables, and become enamored by how simple they were to reverse. Both due to the simplicity of the game (considering how old it was), and the way the code was implemented. It was just the thing for doing casual reversing work in chunks of an hour at a time.

As a result of this, I've already implemented a great deal of foundation code in ScummVM for supporting the game, with a long term eye for having a clean engine structure that could support all the early Ultima games.  Here's some screenshots of the player within the overworld, a city, and within the dungeons: 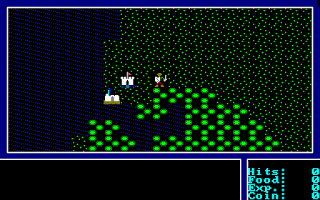 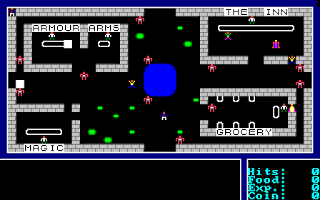 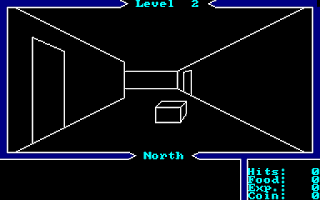 At this point, I've got basic movement functionality working. The player can roam around the map, entering cities, castles, and dungeons. Dungeon movement also works, as does going up and down ladders, so the dungeon can be further ventured down into, or left entirely. That's it at the moment, though; it doesn't yet have any combat, magic, inventory, character interaction, etc. See this Youtube video for an example walk-about that covers venturing into a dungeon, and then heading over to the city of Britian.

Don't expect too much more work on this in the near term, though. As I said, this is more a side thing, and I definitely do want to spend some time unwinding and playing some games. When I get my fill, later in the year, then we'll see. At the moment, it's looking strongly like I'll keep working further on this. I've some crazy ideas about not only adding support for the game, but also reusing the Ultima VI tileset to create an "enhanced" Ultima 1 experience that's more visually pleasing, and rework the controls and user interface to be likewise more player friendly. I know that oh, pretty much everyone who ever played their way through the space simulation section would much appreciate mouse control for aiming at enemy vessels. :)

I kind of consider the RPG series of Ultima, Might & Magic, and Wizardry the triumvirate of major RPGs from the last century and, now that ScummVM is embracing RPGs in addition to adventures, I'd love to see them all under the ScummVM banner. Now that at least some of the earlier Might & Magic games are supported, it may well be time to start in on Ultima support :) Of course, I'm not entirely abandoning working on adventure games. I'd previously made some promising initial progress in reversing some of the Legend Entertainment games.. Companions of Xanth and Gateway. Irrespective of how much time I end up devoting to working on Ultima I, I may end up also devoting some of my time to those games as well.

Anyway, that's probably enough for now. I still want to get in some Pillars of Eternity 2 before it's time for bed. :)

Thanks a lot for your work on the Might an Magic games. I'm really looking forward to playing them again on a smartphone or tablet. It's great to hear you're looking into Ultima, and that Wizardry seems to be at least a possibility for the future. The last time I touched that series, it was for a playthrough of Wizardry 6 in Dosbox on an original Xbox. The plan was to import the party into Wizardry 7 and continue there, but unfortunately it turned out that W7 was unplayable in that particular emulation scenario. Anyway, it's great to know there may be even a slight chance of playing these great games once over on current hardware in a few years time. Keep up the great work!