Frotz work in ScummGlk is ongoing

Work on the ScummGlk engine is ongoing. Since Christmas holidays I've been primarily focusing on adding support for the version 6 graphical Infocom games to the Frotz sub-engine, with particular focus on Zork Zero to begin with. Whilst I don't count the version 6 games among the best of the original Infocom line-up, ScummVM has always been about providing as good a coverage of old games as possible. So from my point of view it's worth spending the extra time adding support for the remaining Infocom games now rather than later, and only moving onto the next sub-engine once that's done.

Below is a screenshot of Zork Zero as of when I came back on the 7th January: 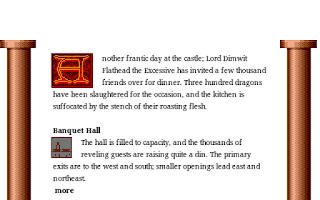 As you can see from the screenshot, the background is starting to be properly rendered, and the 'A' and location glyphs are properly rendered and interleaved with the text. The status bar still needs some work, though.. although it is being rendered, it's then being completely wiped out by the status bar window, which isn't even displaying any text yet.

Right now, I'm focusing on adding the 8x8 fixed size font used in the original games. If you look closely at the screenshot above, the current resizable TrueType font doesn't really look crisp at that low a resolution, and is somewhat blurry. I'm currently making a tool to use the same font data that Frotz has, and produce bitmaps to add to the fonts Zip file for the different 8x8 font styles (normal, bold, emphasized, and bold & emphasized). It has had it's share of issues: 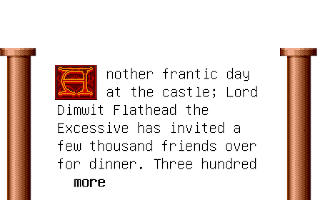 Anyway, progress is gradually being made, and I hope to have Zork Zero fully supported soon. The other v6 games currently error out immediately during startup, but I'm hoping further adding support for them will be a simpler matter.

Posted by Dreammaster at 1:52 PM

Were you able to get adaptive palettes working?