Work has been progressing furiously with the MADS engine, and Rex Nebular support. Whilst I was able to us some code from the previously engine version, a lot of it turned out to be more M4 specific than I'd anticipated, and had to be freshly disassembled and/or rewritten. Additionally, with my greater experience writing engines, I've been able to lay out a cleaner separation of methods into classes than previously, particularly keeping in mind extensibility for having separate game logic for the other MADS games. As a result, the new MADS engine is already significantly different from the old M4 engine.

After a great deal of implementation, not to mention debugging of my code and comparison against the original running in DOSBox, I finally have the background of my test scene showing! See below for the first 'new engine' view of Rex Nebular in all it's glory: 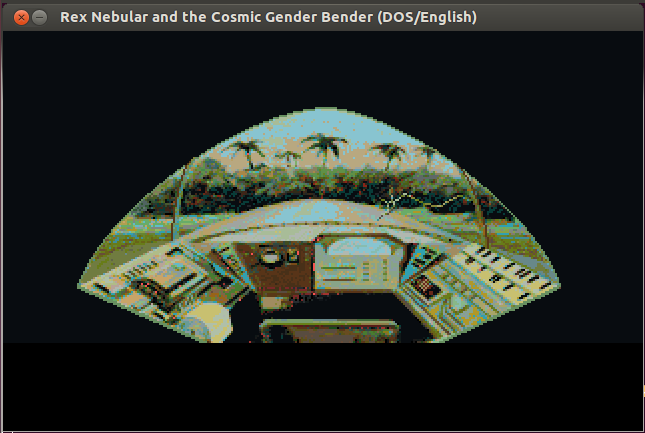 Particularly auspicious considering I see that Rex Nebular has just been released for sale on GOG. So presuming that the engine gets finished this time, people will easily be able to obtain a copy. :)

What's next? In order to reach my original milestone of having an animation sequence playing correctly, it meant that I needed to properly implement the entire frame step and rendering logic from the game, which had a great deal of code, and many different secondary methods that I've encapsulated into a multitude of classes for sprite sets, pending sprites, active sequences, text display, and lots of other things. Not to mention a pretty complicated precursor to M4's RGBList, where resources loaded in for both the scene and for sprites are allocated chunks of the palette space.

I'm currently focusing on debugging the standard sprite drawing, which is used by the animation class. I'm hoping with a bit more work, I can it to properly show the animation sequence. Doing so will also help ensure that all the sprite display logic for the scene also works correctly. This will make it easier to start work later on for full blown game scenes, since all the necessary sprite display will already be done, and I can concentrate on things like player movement, action handling, etc.