I only realized with the turning of the new year that I have characteristically, once again, fallen behind on posting interesting news in my blog. My bad. As many of you will already know, last year I got sucked into working on the Comprehend series of games as a sub-engine under Glk. They were an interesting early series of combination graphics and text entry games including Transylvania, Crimson Crown, and OO-Topos.

As has become a bit of a custom over the last few years, over the Christmas holidays I scouted around for an existing source code project to work on integrating into ScummVM, as somewhat of a break from the various disassembly-based work I frequently do throughout the year. And behold the result of my work: 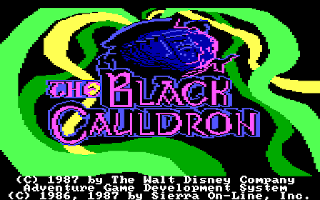 See here for a Youtube link of a screen capture I did for the game starting up. The Black Cauldron Remake is a point and click remake of the early Sierra game of the same name which I did over a dozen years ago, before I started working in earnest on the ScummVM project. Having it supported in ScummVM will be satisfying.. harkening back to my earliest days of open source work, and bringing it all full circle. And the important part of the remake is that it was done in AGS.

That's right. There's now an AGS engine for ScummVM that's at least capable of playing one AGS game through in it's entirety. Late last year I broached the subject of ScummVM integration on the AGS Forums, and the response was positive. AGS is currently in transition between 3.5 and a major redesign for 4.0, so there wasn't a rapidly moving codebase to try and keep up with. This engine, like the standalone interpreter it's based on, should eventually support all the AGS games from 2.5 to 3.*. Luckily, this covers the majority of the popular AGS games The ScummVM implementation will be just another implementation of AGS, so it'll be an alternative to the standalone interpreter, rather than a replacement.

The engine isn't yet available on Buildbot, so don't yet go rushing to grab a daily build just yet. I plan to do a pull request shortly, so it'll likely be merged into master in a few weeks once it's approved. There's still a lot of cleanup work to be done, bugfixing for other games, etc. so work on the engine will be ongoing. I added detection already for a few other games, but they crash on startup due to other unimplemented methods.. Rather than importing Allegro and other libraries used by the AGS interpreter in their entirety, I created a mockup layer that either remaps Allegro calls to ScummVM equivalents, or implements a bare-bones equivalent for the project from scratch. But so far I've only focused on what Black Cauldron needed, so other parts will be implemented as I gradually test other games.

On a side note, for all the AGS games to work on non-Windows/Linux/Mac systems, all the various plugins games used will also need to be re-implemented in C++.. I can't just have ScummVM loading in DLLs like the original interpreter does. Thankfully, I've already been able to obtain the original source for the AgsCreditz plugin from it's author,  Hopefully other plugin authors will be likewise generous when I get to them. When done, this'll mean AGS games will be playable on more systems that AGS wasn't previously available for.

One day in the near future, expect to play some of the classic AGS games like the AGDI Sierra remakes in ScummVM :)

Posted by Dreammaster at 4:17 AM

That's exciting!
The AGS engine will add support to a massive library of games!
Thanks Dreammaster!

You're welcome. It's gratifying seeing how enthusiastic everyone is :)

This will really help preserve some AGS gems, as they tend to break on OS and hardware updates, and AGS games don't often get updated due to it breaking save game compatibility.

I would like to help test some games and track down some plugins.

exactly bro... it is very exciting! There's now an AGS engine for ScummVM that's at least capable of playing one AGS game through in it's اسباب بازی . Late last year I broached the subject of ScummVM integration on the AGS Forums, and the response was positive. I am in too.