With the end of the year upon us, I thought it was time to do a blog post. And then I double-checked, and realized that I hadn't actually done a blog post since the start of last year. Awkward! So, yes, it's definitely well past time that I did a new post :) Things have obviously moved on since the last time I posted. In that time, the AGS engine has been merged into master, and is now officially part of ScummVM. I also spent some finishing the game Chewy Esc From F5, and it now too is finally part of the official releases.

My passion has always been reverse engineering, and due to certain real world considerations, I wanted something simple to work on for the last six months. I ended up choosing Might and Magic 1 for several reasons. I had already done some minor initial work on it, and found the disassembly areas I'd already looked at fairly straightforward. Plus, we already supported the Xeen games. I figured that if M&M1 were supported, M&M2, which I think is closely based on 1, would also be easy to support in the future. Plus, Xeen was closely based on M&M3, so it would be easier to support that as well. So we could eventually end up supporting all the Xeen games 1 through 5. And since I know there's projects implementing M&M6 and later games, maybe one day they could be merged in, and ScummVM could support the entire series. And then maybe onto Wizardry and Final Fantasy :) 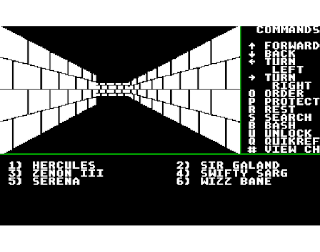 .Plus, given my familiarity with the Xeen engine, I was very interested in the possibility of introducing an "enhanced" mode to M&M1 that brought the user interface of the Xeen games to the primitive user interface of M&M1. With cleaner visuals for the various dialogs and niceties like the minimap, it could encourage people who never played the original to finally try out the game that started the entire series. 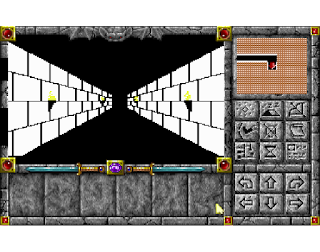 So, how is my work on the game progressing? As of today, I'm finally closing in on finishing re-implementing the original. All the user interface and game logic is done and tested, and all that's left is debugging the combat subsystem. Just last night I finished fixing the code relating to party members attacking the monsters, and now I need to start working on the code for when monsters attack the party. Apart from that there'll just be general testing.

Though there are a few other limitations remaining. I wasn't able to figure out the PC speaker code it uses for sound, so the game will be soundless. At least for the original un-enhanced version. Since the original only had sound in a few places, like when bumping into a wall, or a few notes when a party member is killed in combat, I don't consider that as a major loss.  I was also never able to properly figure out entirely how the original did image decoding and handled the EGA palette. The engine has it's own decoding that I figured out from trial and error, but it does mean that the monsters appear with the wrong colours. Unless I can figure out exactly how the original did the image rendering, I may simply have to use one of the online wikis to see the colors of each monster, and set them up in ScummVM to be correct..

Anyway, I'm hoping to at least get the remaining bulk of combat debugged before my Christmas holidays, and then worry about playing around with doing an enhanced version in the new year. As has been my habit in previous years, I'll likely find something else to do during my holidays. I'm kind of thinking to return to work on the Legend engine again. That seems to be my default fallback project. And who knows, one of these days I may even actually finish re-implementing one of the games :)

So seasons greetings to everyone, and I hope both myself and you all will have a good 2023 to look forward to.

Posted by Dreammaster at 5:20 AM

I really love the look of the enhanced GUI.

Great job combining old and new assets, it looks like it would work really well.

I have a pretty deep understanding of how Might and Magic 2 worked on the Amiga, for when/if you get around to doing it, the levels maps are about 90% the same, just how it does the outsides is different, the insides is like identical to the first game, also have decrypted the graphics data, items, monsters, etc. Back when I was doing my own reverse engineering to attempt to be able to run mm1 in mm2 since the amiga never had mm1.

So if you have any questions about the second game, or even just want the gfx data from it give me a bell.